Why we live here: Farmers explain why they love rural life

You work long hours, through freezing winds and blistering heat. Equipment always breaks down during the 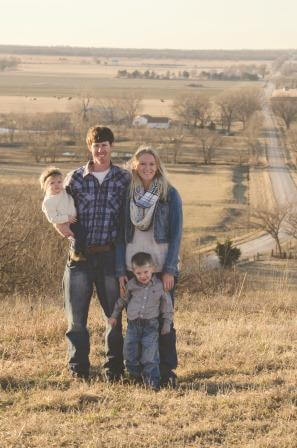 busiest times, and you can never get the dirt from under your fingernails. Timing is everything, but sometimes it’s too wet to plant. You make a big investment, and some years you lose big money.

Will Spargo shrugs it all off. “I live to farm!” he said.

Will raises rice, corn and soybeans near Naylor, Missouri. “I get to see the way newly emerged corn shines in the early morning sun,” he said. “I get to nurture it and watch it grow. And then I get to harvest and see the fruits of our labor.”

We recently spoke to Will and two other farmers, asking why they choose to farm and live in rural America.

Butch Meier and his wife Eileen grow beans, corn and 240 head of registered Angus near Jackson, Missouri. “One great advantage of rural living is having the family close, watching them grow up and become responsible adults, and providing ‘open range’ for the grandchildren,” Butch said.

Janet Phillips and her husband Caleb raise corn, wheat, soybeans and 300 cow-calf pairs near Cherryvale, Kansas. “I love the wide-open spaces,” Janet said. “I love people, but I also love having my space. I love being able to step outside and see all the stars on a clear night.”

Why they came back home

Will is the third generation of Spargos to farm near Naylor. He and his wife Teribeth have three kids—Ricanna, 13; Bryce, 9; and Lucas, 3. They farm with Will’s sister and parents. Will earned a degree at Arkansas State University, 70 miles from home. He finessed a class schedule that allowed him to drive home and farm most days of the week.

“I couldn’t wait to get back,” Will said. “I couldn’t envision myself doing anything else.”

Will and Teribeth also wanted to be close to family. “Farm life has allowed me to do something a lot of people do not get the chance to do—to work alongside my father and to learn from him,” Will said.

Butch got his start raising Angus as a 4-H project, and went on to the University of Missouri, where he graduated in animal science. He coached the livestock judging team at the University of Georgia for a semester, but he always intended to return to the farm and raise quality cattle. Eileen, who grew up near Jackson, also wanted to stay close to family.

“I’ve lived in the same house all my life,” Butch said, adding that it’s been remodeled many times. “I was lucky to come back to Jackson.”

Janet grew up on a farm near Shelbina, Missouri, studied agronomy at Missouri State University, and worked as an Extension agent in Wichita, Kansas, before joining Caleb on his farm. Caleb’s dad and grandfather work land that’s been in the family for decades. Caleb and Janet rent some acreage from the family, and take on nearby rental property when they can to expand their operation.

“I love growing things,” Janet said. “It’s been bred into me. I am a fourth-generation farmer and I am never happier than when I’m working outside.

Janet, Butch and Will agree that a farm is a wonderful place to raise children.

“Spending time with my wife and kids in a tractor or out shoveling rice levees brings joy to me,” Will said. “We get to teach the kids firsthand about the circle of life, and how it is to be cherished and respected.” Farm life also provides opportunities to spend time outdoors with family—hunting deer, fishing for bass in the Spargo pond, or playing catch in a freshly disked field.

Janet wants her toddlers to taste the freedom she enjoyed growing up. “I loved roaming around the farm—it was my playground,” she said. These days, Janet spends most of her time with Chester, 3, and Iscel, 1. When needed, she leaves them with grandma and steps in to drive the tractor or chase cattle. During busy times, she fixes meals for the guys.

Butch and Eileen’s sons, Brian and Greg, remain involved in the farm while working for cattle genetics businesses. Their wives also work in agriculture. Brian and Greg are the fifth generation on the farm, and their three children make the sixth.

“Feeding cattle with the grandkids is a special treat for me,” Butch said. “They’re learning how food is produced.”

Besides nurturing kids and grandkids, Butch lists other things he savors about rural living: 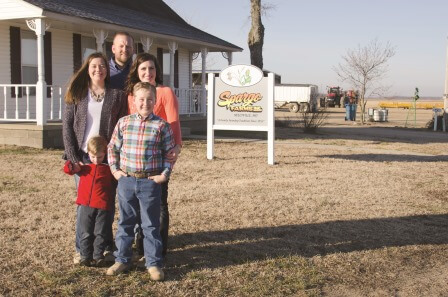 They mention a few downsides

Farming isn’t always milk and honey. As Butch said, income is uncertain, and it’s hard to get away: “Crops and cows come before fun.”

Janet sees another negative to rural life. “One thing that really gets old is having to drive a long way to get to everything,” she said. “That being said, I always told God that I wanted to be 30 minutes from Wal-Mart and an hour from the closest mall, and that’s where I’m at.”

For Will, the good outweighs the bad. “We’re close enough to town to enjoy a movie or a meal out,” he said. “With high-speed Internet, we have so many more options than we did years ago. I wouldn’t trade places with anyone for all the money in the world.”

All three of our farmers have been active in farm groups.

Will is on the Missouri Soybean Merchandising Council, and recently completed a term with the United Soybean Board. Teribeth serves on the state board of Missouri Farm Bureau, and both Will and Teribeth served on its Young Farmer and Rancher (YF&R) Committee.

Butch has been involved in the American and the Missouri Angus Associations for 58 years, including stints as president of each. He’s currently vice president of the Missouri Cattlemen’s Association. “It’s natural to step up and offer my time in return for all the benefits my family has received from these associations,” Butch said. “One of the biggest benefits is meeting great people.”

Each April, during Farm Day near Jackson, Butch and other producers help about 900 third-graders learn about crops and livestock. “Some are touching a farm animal for the first time!” he said.

Janet and Caleb have been involved in Farm Bureau since they first married, and Janet chairs the Kansas Farm Bureau’s YF&R Committee. “One of our jobs on the committee is helping to put on an annual conference that gives young farmers and ranchers from across the state a chance to get together and talk about things happening on their farms,” Janet said.

Dreaming of the future

Our farmers share a similar dream—and it’s all about the kids.

“I dream that my children will have an opportunity to farm and ranch if they choose,” Janet said.

“My dream is for my sons and grandchildren to continue this lifestyle and make a good living,” Butch said.

Will plans to be the old man at the local coffee shop. “And, should our children decide that they want to continue on in the family operation, I hope to be able to pass on some of what I have learned,” he added. “They’ll have opportunities that I can’t even begin to imagine.”