After activities were curbed due to COVID-19 last year, the 2021 Missouri Farmers Care (MFC) Drive to Feed Kids campaign came back in full 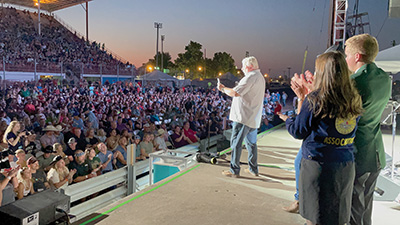 Fans at the Hank Williams Jr. concert, which closed out the Missouri State Fair on Aug. 21, react enthusiastically as Jeff Houts, Missouri Farmers Care chairman, announces that this year’s Drive to Feed Kids raised resources for 2,015,088 meals. force, raising enough resources for a record-setting 2,015,088 meals to help feed hungry children across the state.

“Over 10 years ago, the leadership of Missouri Farmers Care saw there was a gap between the hard work of our farmers and ranchers producing food year-round for con­sumers and what ended up on Missourians’ dinner tables,” said MFC Executive Director Ashley McCarty. “They felt called to fill in that gap on behalf of those who couldn’t do anything to change their situation. Out of that effort evolved the Drive to Feed Kids.”

According to Feeding America, the nation’s largest domestic hunger-relief organization, 13.8% of Missourians were considered food insecure in 2021. Among children, that number is even higher—15%.

“There are thousands of hard-working Missourians who can’t make ends meet and don’t have enough to feed their families. That’s just a reality in Missouri,” said Scott Baker, director of Feeding Missouri, an association of the state’s six regional food banks. “However, another reality is the heart and commitment of Missouri’s farmers to do all they can to help neighbors in need. The impact of the Drive to Feed Kids campaign is substantial, and we are truly grateful.”

This past year, the program benefited from several key partnerships and programs, culminating with activities at the Missouri State Fair: