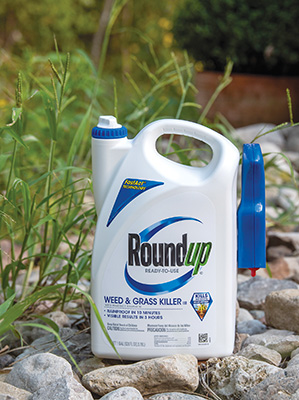 Consumers who have relied on glyphosate for weed control in their lawns and gardens may no longer have that option a little over a year from now.

In July, Bayer officials announced the company is removing any of its products containing glyphosate, including Roundup, from the U.S. residential marketplace, effective as early as January 2023. There will be no change in the availability of its glypho­sate formulations for agriculture and other professional markets, according to Bayer.

The company says it will replace glyphosate in the lawn and garden marketplace with new formulations that rely on alternative active ingredients. Bayer may still sell these products under the Roundup brand.

In a press release, Bayer explained that the move is being made to manage litigation risk and not because of any safety concerns or admission of liability. Bayer, which bought Roundup’s parent company, Monsanto, in 2018, has been plagued by lawsuits alleg­ing that glyphosate causes non-Hodgkins lymphoma. More than 90% of the claims came from users in the lawn and garden market.

While Bayer continues to dispute those allegations and cites conflicting scientific reports, the company recently released a five-point plan to close the Round­up litigation. The removal of glypho­sate from the lawn and garden market is among the pack­age of legal and commercial actions Bayer will take to address potential future lawsuits.

The company also intends to set up a new website with scientific stud­ies relevant to Roundup’s safety that will provide even more transparency to purchasers about the products they use. That website is expected to be launched by the end of 2021.