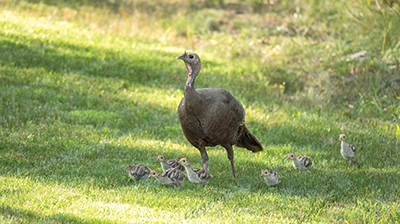 Starting this spring, researchers are taking a closer look at why wild turkey numbers are decreasing in Missouri. They believe poor production is mainly to blame, with turkey hens raising fewer poults each year.When spring turkey season opens in Missouri on April 19, hunters may find the gobblers to be more elusive than ever.

The state’s wild turkey population is in decline, dropping more than 60% since 2004, and production of young turkeys is at near-record lows. The Missouri Department of Conservation’s statewide poult-to-hen ratio in 2020 was 1.0, which means each female is only producing one baby turkey per year on average.

This poor production—not poor survival or overharvest by hunters—appears to be the greatest contributor to the decrease in turkey population, according to MDC. Multi­ple factors influence turkey production, including weather, habitat, predators and food.

Researchers at the University of Missouri and MDC are launching new studies to pinpoint possible reasons for the decline. This spring, two MU researchers will start tracking wild turkey movements by attaching GPS backpacks to 45 hens and their poults in Putnam County, Mo. The backpacks, which are fitted with radio transmitters and accelerometers that sense motion and velocity, will help them gather behavioral information. Trail cameras also will take images of poult predators in the landscape.

With the help of technicians and two doctoral students, the team plans to tag 150 tur­key hens with GPS transmitters over the next four years. The project is funded through a $1.3 million MDC grant with support from the National Wild Turkey Federation.

Even with the downward trend, Missouri still boasts one of the largest wild turkey populations in the nation, with somewhere between 350,000 and 400,000 statewide. About 10% of that population is harvested through hunting each year.