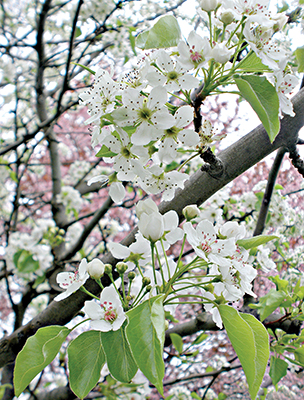 Though once used widely in landscape design, the Bradford (Callery) pear tree is now considered by many to be a nuisance plant.Last year, when people across the U.S. and Canada re­ceived unsolicited packets of seed believed to originate in China, the Weed Science Society of America (WSSA) was among those to raise the alarm and say the seeds shouldn’t be planted. Authorities had discovered some packets contained noxious weed seeds that could threaten both agricultural and natural areas.

Jacob Barney, an associate professor at Virginia Tech who spe­cializes in invasive plants, said the caution is well warranted.

“The decisions each of us make can have long-lasting results that impact future generations,” he said. “When we intention­ally or unintentionally plant species that originate outside the region where we live, we run the risk of introducing weedy invaders that can harm our environment, our economy and even human health.”

In fact, some of North America’s most troublesome invasive weeds owe their origins to poor decisions, inattention or a lack of understanding of the potential risks that non-native plants can represent. For example, the Bradford pear tree, a variant of the callery pear, was once in high demand in the horticultural industry. Unfortunately, they’ve proven to be a real pest when growing outside their native environment, crowding out native species and creating dense thickets that are virtually impassable.

Cheatgrass, also known as downy brome in the eastern U.S., is believed to have been introduced to the United States from Europe in the 1800s via contaminated grain and packing materials. At one point it was even purposefully planted by the USDA to remediate degraded rangelands. Today cheatgrass infests every region of the U.S. It overtakes native plant species and is a common pest in crop fields, nurseries and orchards.

Another example is hydrilla, which made its way to the U.S. a half century ago when a Missouri tropical fish dealer imported the plant from Sri Lanka for aquariums. The aggressive aquatic weed is now among the most widespread of the 112 weeds on the Federal Noxious Weed list. It clogs waterways, displaces native vegetation, and contributes to harmful algae blooms.

Here are tips to help protect against new invasive species and to avoid spreading those that are already entrenched:

1. Don’t bring it back. You may fall in love with the exotic plants you spot during a tour of a foreign country. But take photos and resist the temptation to bring specimens home. Federal regulations place strict limits on any non-native plant or plant parts you hope to grow back home. You’ll need a special certification that the plant is safe for import.

2. Go native. Select plants native to your region. Unlike non-native plants, you’ll find they are well behaved and won’t crowd other beneficial native species. They also provide food and habitat for butterflies, insects, birds and other animals.

3. Make smart purchases. If you are planting from seed, buy local seeds certified to contain minimal contaminants. Read the label carefully to see what’s included so you don’t plant non-native invaders that can overrun your garden.

4. Be careful outdoors. Take commonsense measures to make certain you aren’t transporting invasive weeds as you travel and enjoy camping, boating, hiking or other outdoor activities. Carefully inspect and wash your boat, vehicle, ATV, hiking boots or other equipment to remove any plant fragments or seeds you’ve picked up along the way. And avoid carrying firewood with you from one location to an­other.

5. Become a “spotter.” Early detection of new invasive weed outbreaks can help authorities take swift action to prevent further spread. Familiarize yourself with the invasive weeds most prevalent in your area—information that is available through the Invasive Plant Council covering your state or region. In MFA territory, that organization is the Midwest Invasive Plant Network www.mipn.org. These same organizations typically have reporting protocols for new infestations you might discover.