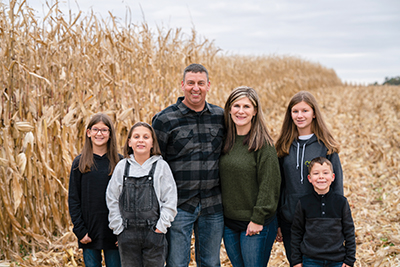 Recipients of the state's 2020 Leopold Conservation Award were the Yoder family of Shelby County - Joshlin and Addie and their children, Aliza, Hazel, Scarlett and Linus.Applications are now being accepted for the 2021 Missouri Leopold Conservation Award Program, recognizing farmers, ranchers and other private landowners who go above and beyond in the care and management of natural resources. Nominees could win a $10,000 award for their efforts.

The Sand County Foundation, a nonprofit conservation organization, presents the Leopold Award in 23 states based on such criteria as innovation, adaptability, resilience, leadership and communications. Missouri Farmers Care, a coalition of agricultural organizations including MFA Incorporated, partners with the foundation to bring the award to the Show-Me State.

In Missouri, the 2020 winners were Joshlin and Addie Yoder of Leonard, Mo. Previous state award recipients are the Brinker family of Auxvasse in 2019, the Scherder family of Frankford in 2018 and the Lambert family of Laclede in 2017.

Given in honor of renowned conservationist Aldo Leopold, the award recognizes those who inspire others with their dedication to land, water and wildlife habitat management on private, working land. In his influential 1949 book, “A Sand County Almanac,” Leopold called for an ethical relationship between people and the land they own and manage.

Nominations may be submitted on behalf of a landowner, or landowners may nominate them­selves. Applications can be found and submitted online at mofarmerscare.com/lca or mailed to Missouri Farmers Care, c/o Kari Asbury, 4481 Brown Station Road, Columbia, MO 65202. All applications must be submit­ted or postmarked by June 30.

Finalists will be announced in September with plans to pres­ent the award in November 2021 at the Missouri Governor’s Conference on Agriculture.

More information on the award and its recipients can be found at sandcountyfoundation.org.