When pigs fly, they can now depart from St. Louis airport 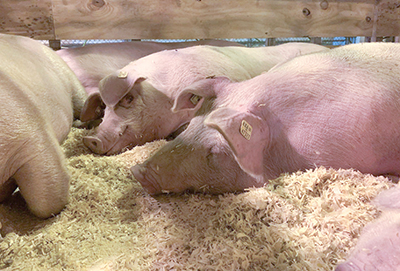 Some 200 breeding pigs from a farm in Henderson, Tenn., were in this first LEIF shipment. An increased demand for live animal cargo flights prompted investment in the one-of-a-kind facility.A shipment of breeding pigs from Henderson, Tenn., took off for Sao Paulo, Brazil, on the afternoon of Nov. 11, rep­resenting the first farm animals to fly from the Livestock Export and Inspection Facility (LEIF) at St. Louis-Lambert International Airport. The global hub is the first of its kind in the United States.

The shipment to Brazil demonstrates an aggressive new strategy for overseas exports at St. Louis-Lambert Airport and is the first of several planned shipments. An increased demand for live animal cargo flights during COVID-19 positions St. Louis as an import­ant central hub for livestock transport, said Gov. Mike Parson in commenting on the inaugural LEIF flight.

“This is exciting progress for the state and shows that Missouri’s strong agricultural industry continues to power our economy,” Parson said. “Missouri has long worked to push agricultural tech­nology forward. What we are seeing today is how Missouri inno­vations and infrastructure are allowing us to market the industry to the world in a new way.”

LEIF is a dedicated and customizable 18,000-square-foot facility designed for shipping livestock. It has a 12,000-square-foot adjacent open bay that was utilized to load the pigs onto a Boeing 747-400F for the flight to Brazil. It’s the only on-site 24/7 livestock palletizing facility in the United States and is uniquely situated to service livestock exporters. Missouri has consistently ranked in the top three states for number of livestock, and other top-producing states for swine, cattle, goats and sheep are all a short drive away. 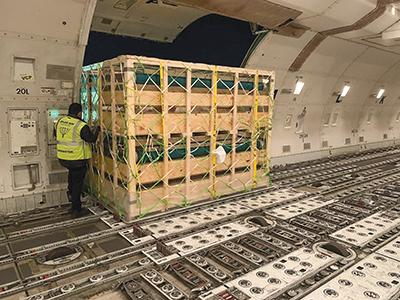 Crates of live pigs departed the St. Louis Lambert International Airport on Nov. 11, bound for Sao Paulo, Brazil, aboard a Boeing 747- 400F. The shipment was the first from the airport’s Livestock Export and Inspection Facility (LEIF), the only on-site 24/7 livestock palletizing center in the United States.The National Center for Beef Excellence (NCBE) recently secured a Missouri Agriculture Small Business Development Authority grant to lend assistance to STL and the Midwest Cargo Hub Commission in promoting the LEIF facility, which has been approved for livestock inspection and exports since 2017.

“We are crossing a threshold a long time in coming,” said Chad Sayre, MCBE chairman. “This could open up active trade around the world for Missouri and Midwest livestock. Our producers, family farmers, agribusinesses and research institutions all can benefit from creating this portal to the world market.”