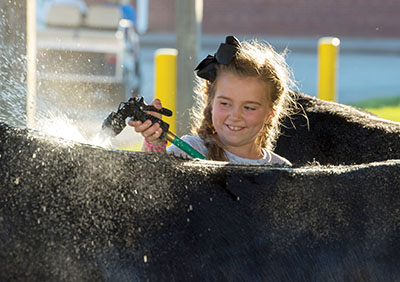 Nora Kate McGaugh of Carrollton, Mo., washes a show calf during the 2019 Missouri State Fair. She and other livestock exhibitors will benefit from a new cattle barn bedding project for the 2020 event.Cattle exhibitors at this year’s Missouri State Fair will no longer have to bring in their own bedding, thanks to a pilot project approved by the fair commission last month. The plan calls for premium mulch bedding to be provided by the fair in each cattle stall and then composted after the event.

“This project has been a priority for the commission and Missouri State Fair staff,” said Fair Director Mark Wolfe. “Through the efforts of many dedicated individuals, I am excited to see this pilot project being implemented for the upcoming fair.”

Wolfe said the first part of the pilot project is removal of the existing sand in the cattle barn stalls and the addition of a compacted lime base. These efforts are currently in progress by State Fair maintenance staff. Bedding will then be purchased from Missouri Mulch of New Florence, Mo. The mulch comes from scrap pieces of white oak lumber used for wine barrel staves.

Following the fair, Bluebird Composting of Fulton, Mo., will pick up and haul the used mulch to be made into organic compost, which, in turn, will be used to fertilize the white oak trees that are grown for barrels.

“The life cycle of the mulch is fascinating and shows real efforts in agricultural stewardship and doing what’s best for our fair, our exhibitors and our environment,” said Wolfe.

Costs for the pilot project are estimated at $33,000 a year. The State Fair Commission approved a plan to divide the costs into thirds. The Missouri State Fair Foundation is sponsoring the costs associated with the composting (approximately $11,000) and the fair will pay approximately $11,000 to support cattle exhibitors. The remainder of the funds will come from a $10 per head bedding fee charged to beef cattle exhibitors only. The fee will be collected along with beef cattle entries, which totaled around 1,100 head in 2019.

Dairy cattle exhibitors, who show toward the end of the fair, will still be allowed to bring in their own straw to place on top of the mulch bedding. Exhibitors will be required to keep their bedding clean and trash free so that it can be composted.

The 118th Missouri State Fair will be held Aug. 13-23 in Sedalia. For more information, visit mostatefair.com.