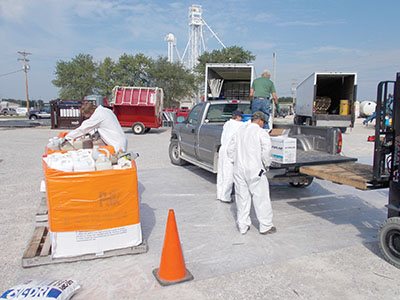 During the Aug. 3, 2019, collection event at MFA Agri Services in Ste. Genevieve, approximately 3,142 pounds of waste pesticides were collected from 22 participants. The program continues at different locations in 2020From 2012 to 2019, the Missouri Pesticide Collection Program has conducted 50 events, collecting more than 530,000 pounds of waste pesticide from 1,571 participants. In 2020, the department will again collect herbicides, insecticides, fungicides, rodenticides, dewormers, fly tags and fertilizer containing pesticides. Events are held from 8 a.m. to noon at these locations, which include MFA Agri Services in Montgomery City and our local affiliate in Clinton.

At these events, approved hazardous waste contractors will send the chemicals to a permitted incineration facility.

To participate, keep all pesticides in original containers and identify those not in original containers or with missing labels. Do not mix the pesticides with other materials, like used motor oil or antifreeze. Make sure lids are tightly sealed. If the container is leaking, place it in a larger container with a non-flammable absorbent, such as clay-based cat litter. Secure waste pesticides upright in a cardboard box and transport in the back of a pickup truck, trailer or car trunk. Keep flamma­bles out of direct sunlight and away from sources of heat.

A hazardous waste contractor will unload the waste pesti­cides from your vehicle. Non-pesticide waste brought to the event will be rejected and sent back with the participant.