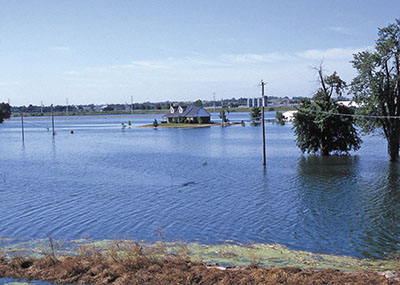 Many producers in MFA territory compared last year's flooding to the Great Flood of 1993, shown here in a stock photo of inundated Missouri farmland.I was 4 years old when the Flood of ’93 swept across the bottoms of Ray County, Mo. In its path was the ground my family has owned for generations. I still remember the rush to get things from the homes of my uncles and grand­mother before the floods crested and ruined a century’s worth of irreplaceable family heirlooms and photos. While those childhood memories are vivid, I realize that they, in no way, compare to the experiences of farmers whose livelihoods were in ruins that year.

Fast forward nearly 26 years to a similar story for most of the Mid­west. This is a story that is all too common for the American farmer. If it’s not floods, it’s a drought. If it’s not disease, it’s insects. After being in the ag industry for nearly 10 years now, there is one adage embedded in my brain:

“The American farmer faces 1,000 variables on any given year. If you farm in Missouri, you can about guarantee you’ll see 999 of them.”

You’ve likely heard a version of this statement before, and to most farmers, it couldn’t be truer. However, risk management can minimize those “1,000 variables,” and MFA has 26 people to help you do just that. 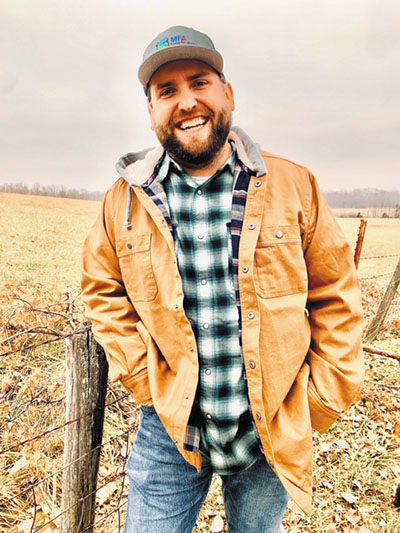 Blake Thomas joined MFA as area crop insurance agent in August 2019. he previously managed a privately owned farm service retailer, where he specialized in agronomy.These 26 people are our licensed crop insurance agents across Missouri, Iowa, Kansas, Illinois and Arkansas who can help reduce the risks that producers may come across. You may already know these agents through their current positions with MFA in precision, seed and feed sales, etc.

These agents, including myself, are led by MFA Crop Insurance Principal Agent Mike Smith, who has 30 years of crop insurance experience under his belt.

By providing educational opportunities while simultaneously helping producers with current and long-term risk management strategy, we are able to put the knowledge and know-how back into the grower’s hands. In addition, we are bringing the service and trust that MFA Incor­porated is known for among farmers and the agricultural industry.

Though we cannot stop these “variables” from happening, given the opportunity to understand your operation and review your current policy, we hope to prove ourselves as your new agent.

These are just a few important dates that pertain to spring-planted crops. There are numerous dates involved with crop insurance. Many of the dates are specific to location. I encourage you to visit with one of our local agents to confirm dates that are important to your farming operation.

December 10: End of insurance period and last day to turn in a claim.