Agriculture atop the Capitol 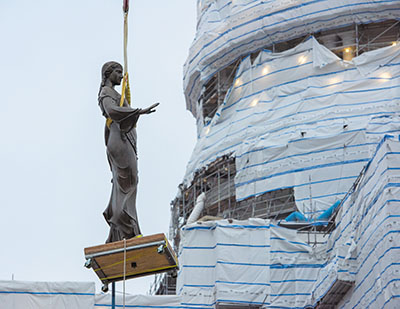 After being on public display for several days in December, the newly restored bronze statue of Ceres is lifted over temporary construction walls around the Missouri State Capitol in preparation for her return to the top of the dome.When the first Missouri State Capitol Com­mission convened at the beginning of the 20th century, planners decided agriculture should have a high-profile place on the colossal structure in Jefferson City.

As a result, a 10-foot-4-inch, 1,500-pound bronze statue of Ceres, the Roman goddess of agriculture, was chosen to symbolize the Show-Me State’s most prominent industry. In the building plans, the statue is described as carrying a bundle of grain in her left hand and the “torch of education” in her right.

Originally hoisted atop the Capitol building in 1924, Ceres came down for the first time in November 2018 for repairs. She returned from her makeover a year later and was briefly on display to the public before re-ascending Dec. 17 to the Capi­tol dome. There, she continues to represent agricul­ture—just as important to Missouri today as it was when Ceres first took her lofty position 95 years ago.