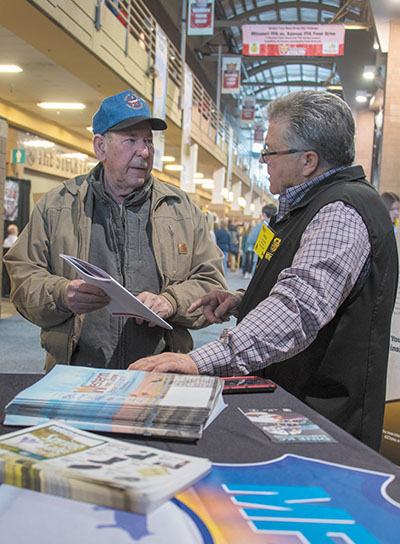 Mike Spidle, right, MFA strategic feed specialist, greets guests at the main entrance to the Western Farm Show at the American Royal Complex in Kansas City, Mo. The show returns for its 59th year Feb. 21-23. MFA will once again be a premier sponsor of the event and host several exhibits.Now entering its 59th season, the Western Farm Show begins Friday, Feb. 21, at the American Royal Com­plex in Kansas City, Mo., and ends on Sunday, Feb. 23. MFA Incorporated serves as a primary sponsor for this event.

“Preparations are underway for another great show with at­tractions for the whole family,” said Ken Dean, Western Farm Show manager. “We’re proud that the Western Farm Show ranks among the top indoor farm shows in the Midwest. We’re not just another big show but really an ag event.”

The show kicks off with the annual FFA day, when stu­dents from across Missouri and Kansas compete in a border war food drive. This longstanding tradition will take on a new format this year. Instead of a single chapter receiving a $500 prize for the highest number of nonperishable food items, all participat­ing chapters that collect at least 200 items will be entered into a drawing for $1,000 to be used for ag educational activities. One win­ning chapter will be drawn from both Missouri and Kansas.

“We’re very excited to introduce this new format, which gives every qualified chapter a chance to win,” said Dean. “We think this will make the food drive more fun and competitive, as well as expand chapter participation and increase food collections to help combat food insecurity in our region.”

On Saturday, Feb. 22, the Stockmanship and Steward­ship Low-Stress Livestock Handling Demonstration will be held at 10:30 a.m. and 2 p.m. This is the 10th year of the event, which is sponsored by MFA Incorporated and free to Western Farm Show paid attendees. Demonstrations are led by Ron Gill, Ph.D., Texas A&M AgriLife Extension special­ist, who has been providing technical expertise to livestock producers in beef cattle nutrition, management and live­stock-handling techniques for more than 23 years.

“We’ve had ranchers see Dr. Gill’s demonstration and come back to the show the following year and tell us how they were able to apply the techniques and see the benefits on their own operation,” Dean said.

Throughout the weekend, attendees are invited to browse the 400,000-square-foot complex, where exhibitors display their latest and greatest equipment and technologies along with wide-ranging displays of other agricultural products and services. Look for MFA exhibits featuring precision agronomy, seed, feed and livestock equipment.

For attendees who need to take a break from the trade show, the Family Living Center on the upper level of the American Royal offers clothing, crafts, food, and health and home décor products.

Show hours are 9 a.m. to 5 p.m. Friday and Saturday, Feb. 21-22, and 9 a.m. to 4 p.m. on Sunday, Feb. 23. Adult tickets are $10 daily. Children ages 12 and under are free. A $3 off coupon is available by filling out a survey on the show’s website or visiting a participat­ing member of the Western Equipment Dealers Association, which produces the show.