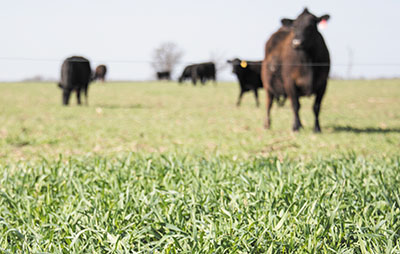 Five plots at three Iowa State research farms were selected for the study to reflect weather and soil conditions around the state. Plot treatments include grazed cover crops of cereal rye and oats interseeded into standing corn or soybeans, ungrazed cover crop and no cover crop. Researchers are evaluating forage yield and quality, cattle performance and soil health.

The early findings confirm that forage yields vary widely from year to year due to field location, weather patterns and planting dates. Spring biomass yields of cereal rye for 2016-2018 ranged from an average of about 800 to almost 2,900 pounds of dry matter per acre at different plots. While in some years the forage yield per acre was nearly 4 tons (dry matter) per acre following corn silage, in other years, the forage yield was less than 200 pounds of dry matter per acre when following full-season corn and beans.

On a good year, at stocking rates of about 1.5 head of cattle per acre, the cereal rye offered 20 to 27 days of spring grazing. In the fall, the cereal rye and oat cover crop mix provided suitable grazing for eight to 13 days. Other years, such as 2018, the spring weather conditions were unfavorable for grazing.

For livestock producers who are uncertain about adding new water and fencing for grazing, cover crops can be harvested as silage or hay to extend winter feed supplies or to market to other producers. Farmers without cattle might sell rights to custom graze or harvest in the late fall or spring.

The study is also looking at how grazing cover crops affects soil health and compaction. Preliminary bulk density tests that measure compaction levels are encouraging. To avoid problems, researchers recommend that producers take livestock off fields during especially wet periods when the cattle will cause more compaction issues that could hamper planting next year’s cash crop—especially corn, which is more sensitive to planting depth.

The project continues through spring 2020. When completed, the researchers plan to highlight their findings in a fact sheet.