In December, students from the Paris High School FFA chapter took time from their indoor studies to sow seed over a half-acre plot on the school grounds. The seed will eventually grow into a plot of native, blooming plants designed to attract a variety of pollinator insect species. 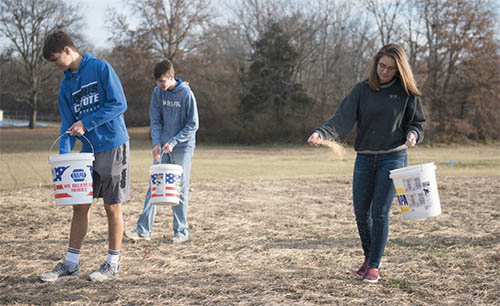 The project is a joint effort among the FFA members, MFA, Missouri Department of Conservation and Quail Forever. Over the past year, MFA Precision Agronomy Manager Matt Hill has been working with the school’s ag teacher and FFA advisor, Josh Bondy, along with MDC Private Lands Conservationist James Ebbesmeyer and local Quail Forever Farm Bill Biologist Courtney Nicks to establish the pollinator plot in hope other schools will follow suit.

“MFA is an active member and funding partner on the Missourians for Monarchs Steering Committee, whose focus is to educate Missourians about monarch butterfly population declines, habitat needs and ways to help,” Hill said. “Schools, community groups, and nonprofits are great partners that typically have access to some acres that aren’t utilized to the full potential and are usually excited about new projects like this.”

Over 30 different varieties of native species were planted in the Paris plot. The students will be involved in its management, collecting data on different populations and participating in management practices like prescribed burnings and landscaping. Ebbesmeyer said that something should be blooming during the spring, summer and fall to attract a variety of insect species.

“We wanted to work with the younger students on this so they would be able to see the full cycle,” he said. “This year these plants will begin to grow, but the plot probably won’t fully flower until next year. By that time, it should be buzzing with activity out here.”

The goal of the project doesn’t only involve educational opportunities for students. Bondy says he hopes the community will use the land as well. A walking path is projected for the future, and signs will identify the native species.

“I’m curious to see what parts of the community find uses for it,” Bondy said. “My wife works as a photographer, and she was excited because it would be another place to take photos. That’s something I hadn’t thought about. I’m want to see other teachers bring their kids over to learn about the life cycles of these plants and insects.”

It’s important to find ways to get kids outside for any reason, Hill added. “But I hope introducing students to the benefits of native plants and diversity early on will result in appreciation later in life.”